Elm Staff [Attunement]
Current Owner: Ariana Gladendale
With an action, you may regain a 4th level spell slot or lower.

Once expended, you cannot use this ability again until you complete a Long Rest.

While wearing this cloak, you can use a bonus action to change the style, color, and apparent quality of the garment. The cloak’s weight doesn’t change. Regardless of its appearance, the cloak can’t be anything but a cloak. Although it can duplicate the appearance of other magic cloaks, it doesn’t gain their magical properties.

Current Owner: Aaron Echadan
Found within the depths of the Faceless Temple and claimed by Aaron as a memento. Grace proved to be of masterwork quality, with the name of the weapon inscribed in High Elven script across its fuller. It would be repaired by Talisa Shade and is kept in an ornate sheath gifted to Aaron by Impel.

It would later be enchanted by Reese of Reese’s Pieces. When attuned, this sword grants the wielder an ability that is identical to the Misty Step spell, it may be used once per Long Rest. 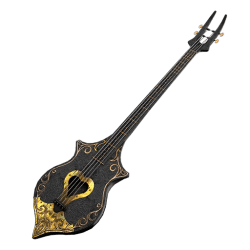 The magical guitar of Brom Dellaphor, bard and previous lead singer of the band Mithralback. It still holds a piece of his soul, lingering in each strum of its strings.

While attuned and playing this guitar, you may use the following abilities:

Performance proficiency while using the instrument.

Spells cast from Mithralback's Melody has a DC15.

Each of these abilities recharge a week after the first ability has been expended.

Mighty Acorn
Current Owner: n/a
A small acorn that when violently thrown into the ground as an action, immediately grows into a 20ft tall oak tree.
Five days after growing, the tree will grow and drop another Mighty Acorn from one of its branches

Appears within 10ft w/ a reaction

Tiara of the Shifter [Attunement]
Current Owner: Ariana
+1 to hit and Damage for Natural Weapons
+1 to DC and hit for Druid Spells cast by wielder

Tap shoes of Consciousness
Current Owner: Imdran Niarch
These sleek black shoes allow the user to remain awake during a long rest, so long as they dance for 5 minutes every hour they do so.

Spirit:
1d4 rounds of combat later at the start of your turn, a spectral dog appears and does one of the following depending on when it arrives:

Material:
The whistle conjures a living metallic dog, its breed and metal determined randomly by the conjurer. If the space where the dog would appear is occupied by other creatures or objects, or if there isn't enough space for the creature, the figurine doesn't become a creature. The dog is friendly to you and your companions. It understands your languages and obeys your spoken commands. If you issue no commands, the dog defends itself but takes no other actions. The dog uses the stat block of a mastiff and exists for 6 hours with an intelligence of 8 and can speak common. It also has darkvision out to a range of 60 feet and can see invisible creatures and objects within that range. These features remain regardless of its conjured form. At the end of the duration, the dog reverts to its figurine form. It reverts to a figurine early if it drops to 0 hit points or if you use an action to blow the whistle again while touching it. Once this feature has been used it cannot be conjured again until 7 days have passed.

Mysteldar's Battle Fist [Attunement]
Current Owner: Talisa Shade
This gauntlet was made for the infamous mage-killer, Mysteldar the Immortal. His namesake proved to be contradictory however, as he was stabbed in his sleep before being able to use the gauntlet.

Casting a spell while worn imbues the gauntlet with arcane energy, charging the gauntlet.
Once charged, the next melee attack you make is made with advantage and deals an additional 1d4 force damage if the attack hits.

This charge lasts until it is expended or you complete a short-rest.

Cat Choker
Current Owner: Ariana Gladendale
While this choker is being worn and not obstructed in any way, such as by clothing, the user has resistance to falling damage.

Elemental Gem: Magic Eater
Current Owner: n/a
Atop this silver ring is a tiny elemental gem which houses a powerful mote of elemental sentience, one which hungers for magic.
When the user succeeds on a saving throw or successfully is missed by an attack from a spell of 3rd level or lower, they may use their reaction to "eat" the spell and store it within the elemental gem, charging it. At any point while charged this way, the user may use their action to cast the spell from the ring using new targets, adhering to components the spell requires as normal. The spell uses the to-hit and spell save DC as determined by the original caster. The ring may only hold one spell.
Once the stored spell has been expended, the gem shatters, leaving the ring as a simple mundane item.

Current Owner: Shimyra Xyl'tyl
A jet black blade that houses the soul of a Dwarf, Duni.

Range 30/60, returns to the user whether it hits or misses

Has the ability to transform into any small mundane item of low complexity.

Scales of Truth
Current Owner: Imdran Niarch
These golden scales are perfectly balanced, seemingly awaiting its next use.

Traumatized Rock
Current Owner: N/A
A rock that seems to vibrate due to something inside it. When thrown, it screams in fear.

Horn of Silent Alarm
Current Owner: Ariana Gladendale
This horn has 4 charges. When you use an action to blow it, one creature of your choice can hear the horn’s blare, provided the creature is within 600 feet of the horn and not deafened. No other creature hears sound coming from the horn. The horn regains 1d4 expended charges daily at dawn.

Terracotta Heelies
Current Owner: n/a
Fine leather boots with a compartment within the heels, activating with a bonus action to clack them together.
Upon activation, the user gains +5 to their movement speed and gains double the effect of the dash action, if only moving in a straight line and not over difficult terrain.

While you wear this cloak and somebody within 60ft of you that you can see takes damage from any source, you may use your reaction to magically swap places with them, becoming the new target of the attack. You may perform this reaction once per short rest.

You have resistance to the Lightning damage type while wearing this amulet.

Found in the ruins of the Faceless Temple, this suit of High Elven half-plate has been repaired by Agripo using the hide of a juvenile purple worm. As a result, it is of higher quality than it might have otherwise been if it had been repaired normally.

You have a +1 bonus to AC while wearing this armor.

Tiara of Mental Acuity [Attunement]
Current Owner: Shimyra Xyl'tyl
A golden tiara with three red gemstones in the front of it.

The wearer gains +2 to any Intelligence or Wisdom skill check.
It also grants the ability to cast the See Invisibility once per Long Rest.

A normal longsword, enchanted by Ribbles Reese, in an enchantment lottery. It possesses the ability to unlock any lock when activated.

When speaking the sword's command word as an action or tapping it against the intended lock, roll a 1d100. On a roll of 100, the lock silently opens. Otherwise, the sword is magical for the purposes of bypassing non-magical resistances.

While attuned to Yours Truly, you gain access to the Return to Sender ability alongside the following spells:
Message
Colour Spray
Grease
Illusory Script
See Invisibility
Skywrite

Return to Sender
You may take a melee attack against a target within 5ft using your action, attempting to slam the shield's stamp into the target, treating the shield as a simple melee weapon that does 1d4 damage.
On a hit, the target is "stamped", granting attacks against them until the start of your next turn.
Once a target has been stamped in this way, you must wait until a short rest is completed before trying again.

Current Owner: Shimyra Xyl'tyl
These simple leather boots are light of step and have amazing grip.
The wearer gains a +5 bonus to their movement speed.

Tyth, War Mage Longsword of Flames [Attunement]
Current Owner: Aaron Echadan
A masterwork sword in its own right, crafted decades ago by Elven swordsmiths, Tyth is a fairly large longsword. It has been modified several times since Aaron began adventuring. The first modification was the integration of a Ruby of the War Mage to allow it to function as a spell focus. The second modification was done by Tali to allow Tyth to ignite itself.

Due to its masterwork craftsmanship, Tyth deals 1d10/1d12 rather than 1d8/1d10. Additionally, its fine-honed balance grants it a non-magical +1 to hit.

While the Ruby of the War Mage is attached to this weapon, it acts as a spell focus.

As a bonus action, this weapon may be set alight, or extinguished, causing it to deal an additional 1d6 fire damage on a hit. Additionally, it casts 20ft of bright light and a further 20ft of dim light. This ability requires a kind of high-quality oil to function. Tyth may contain up to 1 minute of fuel (10 rounds). Each flask of oil costs 5gp.

Havard's Heuristic Hookshot
Current Owner: Shimyra Xyl'tyl
A bronze bangle with an exquisite design atop its front, with a brilliant ruby in the center.

As an action make a ranged weapon attack against an object within 30ft.
An arcane hook launches at the target, latching onto it and sticking to the surface
It remaining until you use an action to retract it or it is forcibly moved by a DC 13 Strength (Athletics) Check.

As an action you may pull the arcane hook towards you or pulling you towards the hook if secured.